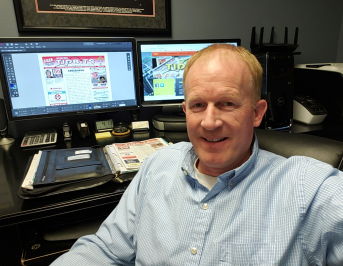 Hi my name is Chad Parkinson and I publish Tidbits of Grand Forks/East Grand Forks. I'm a lifelong North Dakotan. I grew up in Fargo and have lived in Grand Forks since 1987.

I graduated from the University of North Dakota in 1993 with a degree in Marketing.  My first job was selling advertising for The Dakota Shopper. I did that for a little over a year before becoming a manager at Players Sports Grill and Bar. What a great place that was.  Managing at a restaurant was fast paced and fun, but after a few years of that I was ready to get back to advertising.  So I ended up back at the Dakota Shopper as Business Manager. My job entailed sales, design and distribution.  Months later a copy of Tidbits from another area ended up in my hands.  This is when I began pondering the idea of running my own publication.  Then out of the blue in March of 1997 the owner of the Dakota Shopper decided to lock the doors and call it quits.  Talk about a good solid nudge to start Tidbits! And so it began.

I started publishing Tidbits in 1997.  I was ready to put out the first issue in April of 1997, and then the Big Flood came.  I wasn't sure when I was going to get started after that, but somehow I managed to publish the first issue on June 5, 1997.  That issue was just one sheet of paper with one color (see front page image below).  Years later, it is the 16-page, full color publication that you have been reading the last several years. 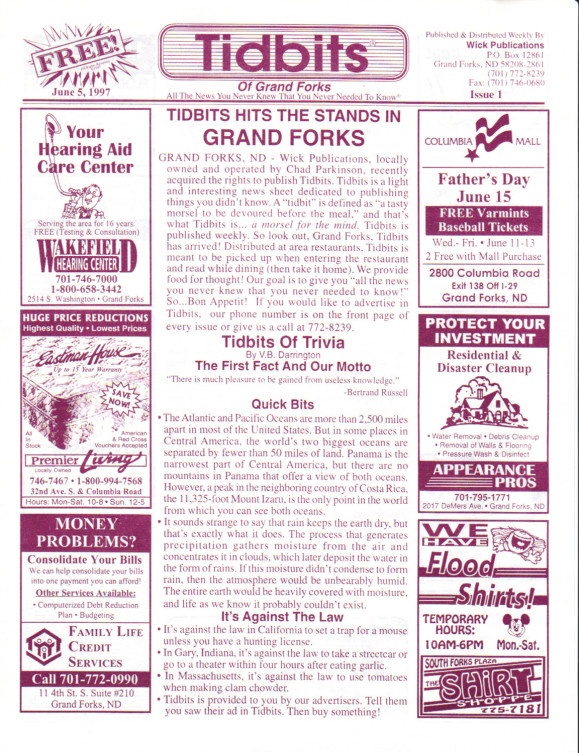 To this day I am still a one-man show.  I sell and design the ads, distribute the paper myself every week and tend to all the other aspects of running a business.  The only thing I don't do is write the topics that you see in Tidbits.  That comes from the Tidbits corporate office.

So there you have it. A quick autobiography on me. Thanks for reading Tidbits over the years. Feel free to e-mail (Chad@TidbitsGF.com) me with any suggestions or comments about the paper.